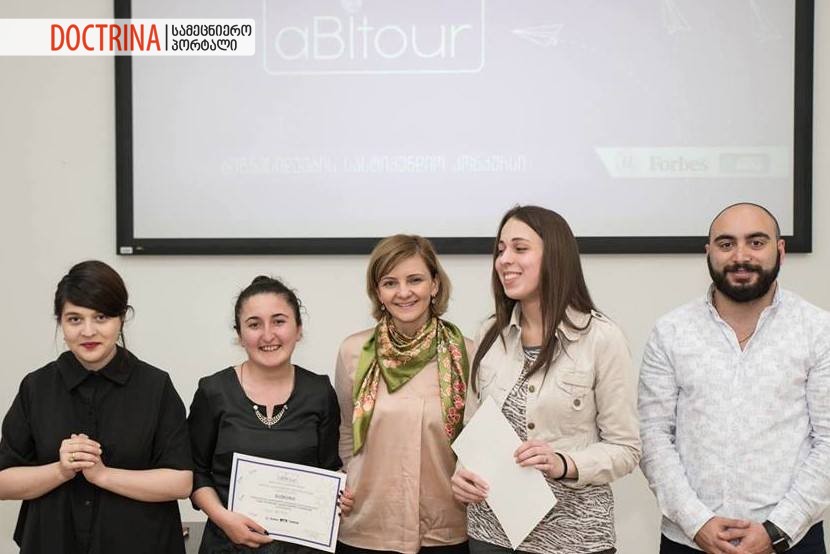 Ilia State University Business School held a business idea scholarship competition “Abitour” for entrants in May, where the teams of graduate students competed with each other to demonstrate their own innovative businesses. One of these is a device that will help hearing impaired persons to communicate.

“Doctrina” has interviewed one of the authors of the idea Mariam Charkhalashvili.

“MCE box” (“Make communication easy”) is the start-up idea by young Georgian girls. Its goal is to help hearing impaired persons to reach active communication with the public. Mariam Charkhalashvili, Sopho Petriashvili and Nini Shavdia are the authors of the project.  The young girls finished school this year and decided to participate in Ilia State University Business business idea scholarship competition.

The innovative device works on the following principle: people who use gestures stand before the screen and speak in the language of gestures, and their movement is displayed on the other side of the screen in textual form and on the other hand, the device will have “Google Voice Search”, and it will be possible to display the verbal text in the language of gestures. It will make easier for hearing impaired persons to communicate with other people.

According to Mariam Charkhalashvili, the device is mainly designed for public institutions, “Our equipment, which can be installed in various offices, companies, banks or restaurants, will make it easier for hearing impaired persons to communicate with the staff of the mentioned objects,” – Mariam Charkhalashvili said.

The girls say they thought about the problems facing the hearing impaired persons earlier, too. “Abitour” has enabled them to present their idea to the society and to gain a positive response, all the more because their device does not have analog. As for the prototype, its creation is related to certain finances. The girls plan to develop the idea and to find necessary resources.