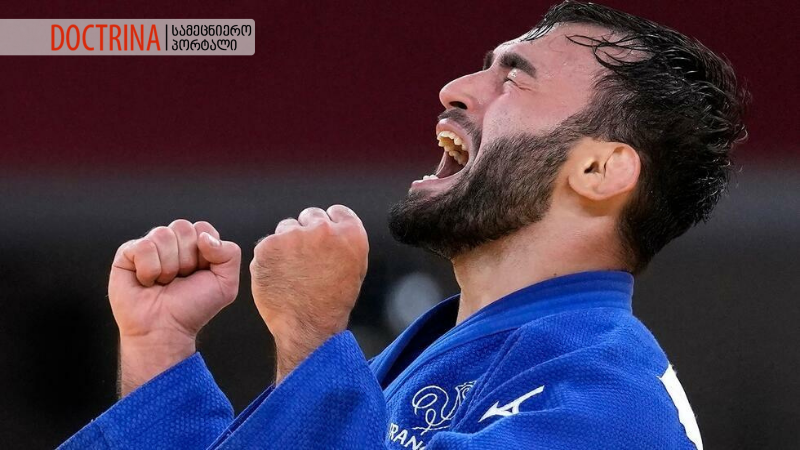 Georgian-born Judoka Luka Mkheidze won the Bronze Medal  in 60kg judo to give France its first medal at 2020 Tokyo Olympic Games. A bronze medal went to Luka after he defeated a South Korean rival.
“Olympic Games create magnificent human stories. Georgian-born Luka Mkheidze, who became a citizen of France in 2015, won the first medal for France in Tokyo. The country, which he chose, is proud of him,” President of France, Emmanuel Macron tweeted reacting to Luka Mkheidze’s victory. Apart from the mentioned success, the local media outlets report about the difficulties that Mkheidze faced after fleeing Georgia with his parents shortly after the 2008 war and went to France, where he received the status of a political refugee and then obtained the French citizenship. It took years.
&quot;What made me want to fight, not to give up, is my career, my family. They&#39;re the
ones I&#39;m fighting for as well, and for me too, of course,&quot; – Luka Mkheidze was
quoted by France Info as saying.
Luka Mkheidze was born in Tbilisi in 1996 and he had a long way to go before he got the French citizenship in 2015 and found his place in the French judo. Luka got interested in judo at a young age, and although his father inspired him in this regard, the judoka emphasizes that he got involved in sports on his own will. According to the French newspaper &quot;20 Minutes&quot;, he arrived at one of the local clubs in Georgia at the age of 5, but the coaches did not accept him due to his height.
For the next two years, Luke pursued other sports – swimming and basketball – and at the age of 7 he put on a kimono and achieved success when he was still very young. However, after the 2008 Russia-Georgia war, at the age of 12, Luka Mkheidze had to leave his homeland with his parents. Luke and his family traveled to Poland, where they spent 8 months. After the local government rejected their application, Luka, at the age of 14, arrived in France with
his parents and received the status of a political refugee. For 1 year, the Mkheidzes lived in a hotel in one of the suburbs of Paris. The newspaper &quot;20 Minutes&quot; notes that one of the turning points in his career, as a
judoka, was the family&#39;s decision to move from Paris to Normandy, to the city of Le Havre. Luka remembers that his club asked the mayor of the city, Edward Philip, to help him achieve his goal and grant him citizenship.
&quot;Usually, this [procedure] takes a long time, but a few months later I received a letter from Edward Philip that I would soon receive citizenship. Soon, it was confirmed by the official letter,&quot; Luka told Le Parisien.
After that, Luka returned to Paris and more and more successfully continued his avorite activity.
According to French media reports, Luka was very lucky when the 2020 Tokyo Olympics were postponed due to a pandemic crisis. Otherwise he could not join the French delegation as another athlete had been nominated in the relevant category.
Mkheidze was picked to compete at an Olympics, in April of the current year, after winning a silver medal at the European Championship. &quot;I arrived here when I was very young. It has not been easy to adapt to a different culture, to learn a very complex language, but I think I am well integrated and I feel great here,&quot; Luka told French media.