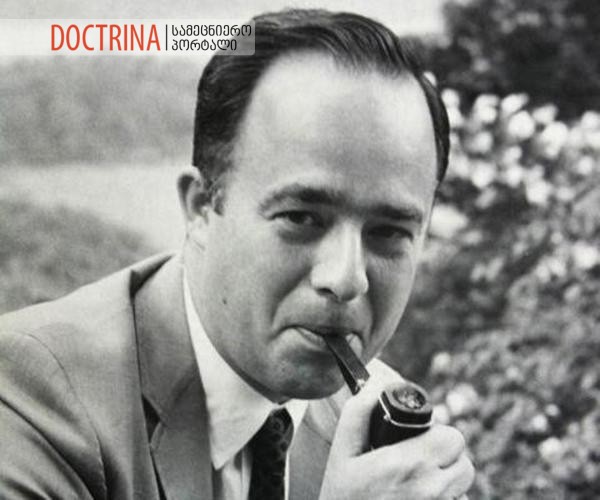 Constantin Sidamon-Eristavi (Connie) served as the vice-mayor of the world’s largest city – New York in 1967-1973. Famous politician and environmentalist was born abroad and grew up there but kept up Georgian customs and traditions throughout his life.

Constantine Sidamon-Eristavi was born on June 28, 1930 in New York. He is a descendant of an aristocratic family. His father, Svimon (Siko) Sidamon-Eristavi, was a colonel and served in the army of the Russian Empire. He returned to his homeland in 1918 and continued his military career in the Georgian Army under the same title. After Georgia’s occupation by Russia in 1921, he emigrated to America. There he married Anne Bigelow Tracy, a daughter of the US ambassador to France.

The couple had two children – Constantine and Anna.

He graduated from Columbia and Princeton Universities. He was awarded a bronze star while serving in the Army in Korea. After graduating, he launched his own law firm, providing legal advice to the Georgian emigrants and assisted them in finding jobs.

Georgians and Caucasians often gathered at the restaurant “Caucasus Eagle” opened in the best part of New York by Svimon. Svimon, along with Georgian ambassador to Italy Giorgi Machabeli and Georgian community chairman and pianist Irakli Orbeliani, founded a Caucasian holiday home “Alaverdi”, located 100 kilometers away from New York. “Alaverdi” has become the place of not only rest and relaxation, but also for forging of bonds of friendship between Caucasians. After the death of Svimon Sidamon-Eristavi (1964), his son Constantine took over the management of the holiday home and the Alaverdi Society, and his wife became a secretary. Constantine Sidamon-Eristavi attended the Milbrook School. He graduated from Princeton University with a degree in Mining Engineering. He served in the Army, participated in the Korean War, for which he earned a bronze star. After serving in the military, he graduated from Columbia University, Faculty of Law in 1957, then served in a law firm and later, he, together with his sister Anna Sidamon-Eristavi (who was also a lawyer) launched his own law firm. After President Kennedy’s assassination, he became a member of a Republican Party and quickly rose through the political ranks.

In 1965, Constantine Sidamon-Eristavi led the campaign of Republican candidate John Lindsay for New York City mayoral elections. After winning the elections, Lindsay appointed him as an assistant in the field of transport. Thus, Constantine Sidamon-Eristavi became a vice-mayor of the world’s largest city New York. He held this post for a long time, under three governments, and played a significant role in governing the city. From 1989 to 1993, he headed the New York Regional Environmental Protection Agency.

The former vice-mayor of New York City has visited Georgia several times with his children. Through his initiative and efforts, the American humanitarian organization American Friends of Georgia was founded in 1994. Its board of directors is currently  chaired by Simon Sidamon-Eristavi, Connie’s eldest son. A lot of humanitarian, educational, and medical programs have been funded through American Friends of Georgia. Connie Eristavi was fully involved in all educational, medical or social assistance projects. Constantine Sidamon-Eristavi, who was born and raised abroad, highly respected Georgian customs. When Connie was attending various events of the Georgian community, he always wore traditional Georgian clothing – Chokha. Constantine Sidamon-Eristavi  died in the United States in January of 2012 at the age of 81.