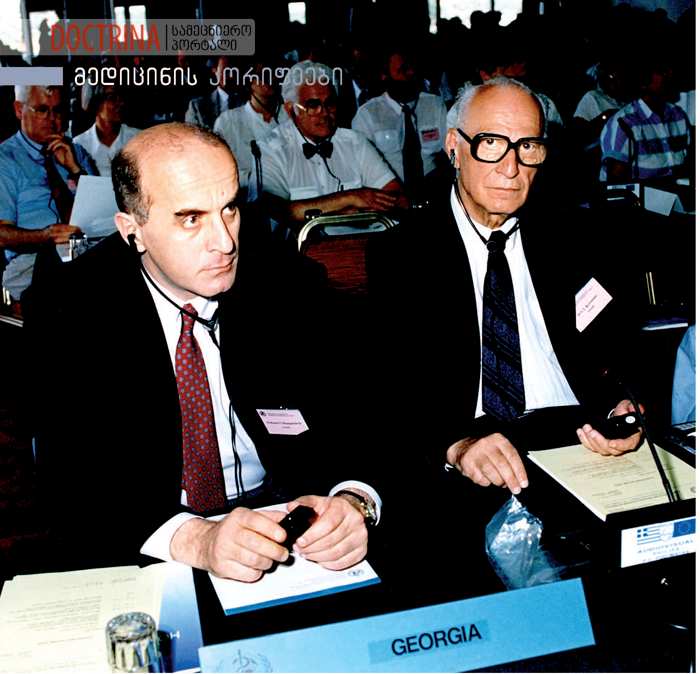 “In 1984, Tamaz finally returned to Georgia and continued to work as the Head of the Department of Microbiology, Virology and Immunology at the Medical Institute. He was actively involved in the pedagogical, scientific and public work. He gave lectures, supervised the education of young scientists, and conducted scientific conferences. His lectures were so interesting that the audience could not accommodate the students. Despite the lack of technical means, Tamaz managed to visualize the material for the students. He used the video and photo footages taken in Asia and Africa. Generations of his former students still remember these lectures and the respect they felt for Tamaz.”

For years, Tamaz Kereselidze had been the republic’s chief epidemiologist, chair of the Georgian Society of Microbiologists, Epidemiologists and Parasitologists, a member of the Union Commission for Microbiology, a member of the Scientific Qualifications Council of the Medical Institute, and a member of the editorial board of the journal Soviet Medicine. During this time he wrote several monographs, a textbook on epidemiology (with O. Kaviladze) and more than a hundred scientific papers.
Tamaz Kereselidze was elected a WHO expert in 1985, and in 1992 Georgia became a member of the World Health Organization. In the same year, Mr. Tamaz was appointed a coordinator of this organization in Georgia and until the end of his life he looked after to deepen the cooperation between the World Health Organization and the governmental and non-governmental organizations of Georgia. In 1995, he started managing the restoration of the Georgian Medical Information and Statistics Service, equip and link it to the World Health Organization. Already in 1996 it became possible to publish the first statistical reference, which reflected the statistical data of Georgia at the national and regional levels.
Professor Tamaz Kereselidze’s scientific-pedagogical and public activities have been awarded many prizes, the Medal of Honour in Health, Health Service Achievement Medal, the Certificate of Honor of the Presidium of the Council of Ministers of the USSR and others. His biography is included in the publication Who is Who in the United States ”(1986-1990). Under his leadership, many PhD and doctoral dissertations have been defended.
Tamaz Kereselidze was a distinguished person. A refined intellectual, a professional, an erudite, a philanthropist, a master of humor, a true patriot of his country.
He enjoyed great authority not only among his colleagues, co-workers and friends, but also in the in international scientific circles.