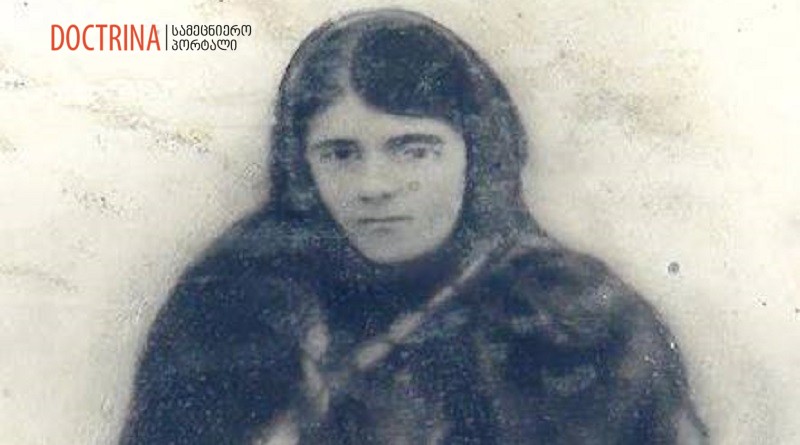 Karajlar is a small village near the border with Azerbaijan. The village is inhabited mainly by Muslim Azerbaijanis, life here is relatively quiet, men enjoy traditional tea, and women are busy with household chores.

One hundred years ago this place was the cradle of the development of democracy. Historian Irakli Khvadagiani discovered written sources, saying that in 1918 a Muslim woman was elected as a deputy.

The Matriarchal History of Karajlar

The woman’s name was Farikhan Sofieva and not much is known about her, including her date of birth. The only thing we know is her signature on official documents, a photograph that supposedly shows her, grave and memories of the locals. They recall that Farikhan carried a weapon and smoked tobacco, which was categorically unacceptable for the Azeri patriarchal society at that time. However, the importance of Farikhan’s history, goes beyond the scale of a small quiet village and clearly demonstrates the development of the first half of the 20 th century.

In 1918, Georgia took bold steps in the development of modern democracy, but three years later the Bolshevik Party destroyed everything. In the wake of the First World War and the Bolshevik Revolution, the country declared independence and decided to create a social-democratic, multi-ethnic region. In a newly liberated country, minority rights, freedom of religion, and the voting rights were to be protected by the constitution. They launched holding elections as the first steps in fulfilling this goal.

“Politicians think that real democracy lies on villages. If a new system is not established at the lowest level, then democracy will not enter Georgia,” said Khvadagiani, who is researching Georgia’s Soviet past.

While collecting information about local rulers of democratic Georgia, Khvadagiani accidently discovered name of Farikhan. The document described in detail the meeting held in Tbilisi (Georgia), which was attended by representatives of various regions, including the village of Karajlar.

“When I saw her name, I was surprised,” Khvadagiani said, adding that initially he saw Farikhan’s name in the electoral list and then in a Russian-language document confirming that Sofieva was the village’s official representative.

The document kept in the archives describes that Sofieva was an independent candidate and competed with all Georgian political parties. Her victory confirms that she enjoyed great authority among the villagers.

The system of participation in the general elections in 1918 was not new for Georgia. In post-imperial Russia, women used to run for offices- while New Zealand allowed women to vote as early as 1893. However, Georgia was distinguished by the fact that the number of Muslims was so large that they could have a representative of their own community. Azerbaijan declared independence in 1918 and was the first Muslim country to hold general elections. However, after the elections, women were not elected to any position. In the 1919 parliamentary elections in Georgia, five women and three men were elected.

It can be said that Sofieva was the first Muslim woman around the world to be elected as an official.

Of course, until now, many Muslim women have had political power and even held some not-so-important positions, but Sofieva was the first to be elected by the people on their own will.

This remarkable event has not gone unnoticed by the Georgian media. In 1918, the magazine Public Affairs celebrated Sofieva’s victory. It should be noted that the newspaper supported the Socialist Federation, the party which was defeated by Sofieva.

“According to media, a Muslim woman’s election was a huge step towards democracy and cultural diversity, which, unfortunately, was soon forgotten, even in the village itself, because the subsequent horrors completely destroyed the chance for democracy.”

The traces of Sofieva’s life have been left in Karajlar. At a local school that has recently been restored, her last name is posted on a plaque. Khvadagiani arrived in the village to find Sofieva’s surviving relatives and collect addition information about her biography. As soon as the door to the school principal’s room was opened, it became clear that he would not have to search for long.

Beg Zadr Sofiev is a school history teacher and a grandson of Farikhan’s brother. Although he did not know Farikhan personally, he still feels close inner ties to her.

“All elders in the region know her name and have heard everything she has done. She was a very active woman, helping everyone. Although people were living in horrible conditions she still did not refuse to help anyone,” said Beg Zadr Sofiev, who compared her to Robin Hood.

The teachers gathered in the room agree with him, adding:

“Farikhan Sofieva was very brave and had a different character. She was smoking tobacco. she was the dominant figure even at the meeting of men.”

Currently, in the community of Azerbaijanis, this is an almost unbelievable behavior. Data collected in 2017 show that girls are married before the age of 16 and can no longer continue their education. Gender discrimination is the norm in Azerbaijan and giving political power to women is almost unimaginable. Even smoking a cigarette is considered unacceptable for a woman.

She was the only girl from a family with 9 children and she commanded her brothers in various public affairs.

There is the house of Rakhshanda Sofieva, who is the widow of Farikhan’s nephew, at the outskirts of the village. The 80-year-old woman is the only persin who has met Farikhan in person and remembers how she won the elections.

“She was a man in the body of a woman. Everyone was afraid of her, everyone in the village sought her advice. Her word was law and no one dared to disobey,” she recalled.

Rashkanda noted that Farikhan had authority even following the Bolshevik Revolution. She played the role of a minister in the village, and like a mullah, she used to read Quran during wedding and funeral ceremonies. Farikhan collected donations for poor people, and wherever she went, she always carried a German revolver with her. No one was able to bring her to his knees, not even the Soviet Union.

Life and Survival in the Soviet Union

Unfortunately her brothers were not so lucky.

Under Stalin’s leadership, in 1937, five of her eight brothers were executed.

“They were rich, so they became targets,” said Rakhshanda. She remembers how the brothers were taken and killed.

Historian Khvadagiani explains that execution was typical of the Stalin era.

“It is difficult to find out why they were punished. Archival materials mention just death penalty. They are said to have been enemies of the people. However, the death penalty did not need much explanation. ”

The bloody massacre put an end to Farikhan’s public life, and Farikhan spent the rest of her life protecting her family. Children of the “people’s enemy” were victims of mass discrimination and were often exiled. Those who escaped being sent to a foreign country were barred from pursuing higher education or holding high positions. After the death of her brothers, Farikhan raised her nephews like own children.

“In fact, she became their mother, lived for them and supported them to receive a higher education. Her nephews became doctors, teachers and high-ranking officials. “Farikhani was such a cool woman,” Rakhshanda recalled.

Farikhan’s great nephew Beg Zadr is praying at her grave. This part of the cemetery is for the Sofievs, and some of the tombstones are decorated with photos. The tombstone of Farikhan is square in shape. There is a large brick mausoleum built by her nephew. There is also a memorial on the site in honor of her dead brothers as their bodies are laid to rest in an unmarked cemetery.

Farikhan died in 1953 of a heart attack after hearing about the death of one of her nephews. Stalin died in the same year. Although Farikhan was almost the only Muslim woman in the world to win the elections on people’s will, she died in a country where there was no freedom of choice or religion. She is known today as “Man Farikhan” and not as “democratically elected leader Farikhan”.

Even her own grant nephew says that it is impossible to elect a woman democratically today because it is unacceptable for their culture. But Rakhshanda, who knew Farikhan personally, thinks quite differently:

“Nothing will come out without education. If a woman is educated like Farikhan was, then nothing is impossible for her.”