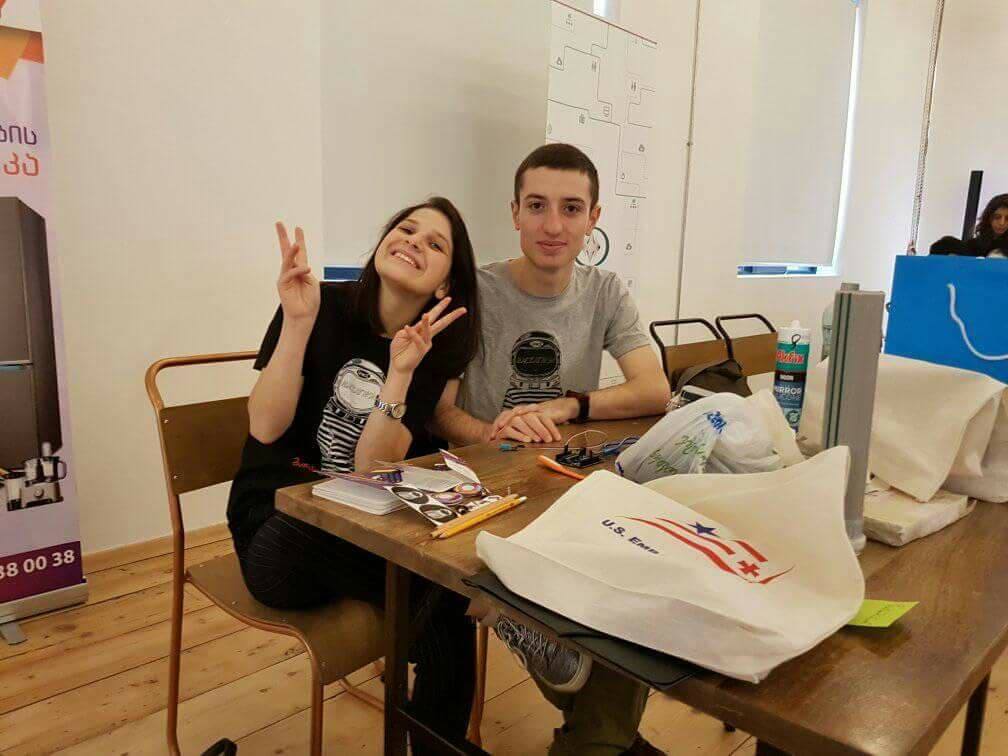 The idea of Georgian young inventors on the creation of oxygen on Mars, is the winner of the space  hackathon.

The final stage of the project “Space Hackathon”, organized by the non-governmental organization “Laboratory of Democracy”, took place on December 13. Young people throughout the country (aged 18 to 25) were able to participate in the competition. As for the main topic of the hackathon, it was colonization of Mars and participating teams should elaborate ideas on this issue. “Everywhere Always” – the team of two young inventors, Davit Khutsishvili and Salome Tatoshvili, who are from Akhaltsikhe region of Georgia, has become the winner of the contest. “Doctrina” has interviewed the friends about their success.

Davit Khutsishvili and Salome Tatishvili are 18 years old students. Davit Khutsishvili studies in the department of chemistry / biochemistry at San Diego State University chemistry, while Salome Tatishvili studies medicine at Ivane Javakhishvili State University. Therefore, they say that the scientific achievements are very important and good challenge for them, therefore, the friends have decided to participate in the contest. It’s notable that their project – “”Cyanocirculation” has become the winner of the  hackathon,  a contest among the 30 participants . Their  project was highly appreciated by one of the members of the the jury, former astronaut woman – Heide  Piper.

The friends have decided to create oxygen using “Cyanocirculation”  on Mars. First of all they used  ultraviolet radiation protective glass and solar panels, which collect energy in the battery that transforms into light energy enabling the cyanobacteria to produce oxygen. “The process needs the soil enriched with organic and inorganic compounds, so we will use Martian soil and additional faeces, because human excrements contain water and minerals, which is absolutely enough for viability of cyanobacteria, ” – Davit Khutsishvili said.

It is notable that human faeces contain a variety of bacteria, they are “rivals” for cyanide baceria, therefore until the fecal masses move to hermetic environment, the friends decided to resist them with UV rays and low temperature resulting the dry freezing, just following the process processed fecal masses will enter the mentioned system.

“After taking oxygen it is necessary to control it in our closed system, for this we have created the clock with a built-in mechanism measuring O2 in the blood. The mechanism is  multi-functional one, it also has temperature, moisture and pulse measurement sensors. Thus, we can not only create oxygen, light energy and soil, but also control theem using the compact clock, ” – Davit Khutsishvili said.

It is noteworthy that this is not the first victory for Davit Khutsishvili and Salome Tatishvili, they diserved the first place in the project “Your Voice Our Future” and have had a five-day visit to Rome.

This time, with the support of TBC Bank, they will travel to the Netherlands to visit the space agency museum “Space Expo” and to spend some unforgettable days there.

As for their future plans, the team plans to go on the chosen road and promote science among young people.